Today I read a paper in Nature by John Bunce and Richard McElreath, entitled “Sustainability of minority culture when inter-ethnic interaction is profitable.” As a staunch advocate for cultural pluralism, and a supporter of the theoretical autonomy of all cultures regardless of minority status (since history tells us that what is a majority today can quickly become a minority tomorrow, and vice versa; ask the Aztecs) I was enthused by the subject matter, and read the paper with great interest.

The paper opens strongly with some well-phrased descriptions of cultural shift and variation. Very quickly though, we start to see a political leaning emerge: 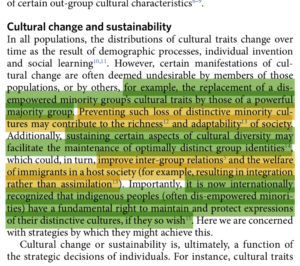 The highlighted sections, while not necessarily incorrect, give us a clear look at authorial intentions. Cultural displacement occurs when minority cultures are lost to a “powerful majority group.” The suggestion that preventing the loss of minority cultures may contribute to the richness of society is something I entirely agree with, but it is also inherently subjective and inappropriate for one of the world’s leading scientific journals. The citation (no. 12) used for the ‘richness’ claim is a dummy citation which refers only to language preservation activist Michael Krauss giving the same opinion. There’s more to criticize about the idea of “optimally distinct group identities” (optimizing for what, specifically?) but you get the idea.

What I think is truly inappropriate is this next part of the work:

We can now infer that this article is the brainchild of John Bunce (author 1) whereas McElreath (author 2) probably played the role of methodological consultant, which makes sense as his best received book is on coding and mathematics. I’m going to continue in reference to Bunce as the author.

Bunce’s description of ethnically Mestizo Peruvians – those of mixed Spanish and South American heritage – is an accusation that carries a moral charge far too great for his feeble implications to support. To describe these people as ‘colonists’ because some of their ancestors were indeed colonists is no different to describing Muslim minority communities in the Balkans as ‘invaders’ because many of their ancestors did indeed enter the Balkans as part of Muslim military invasions. I use this example, because ‘invaders’ is exactly the term used by Brenton Tarrant to describe his victims in Christchurch. I am sure that Bunce himself would be horrified by the Christchurch massacre, and would strongly protest the legitimacy of Tarrant’s terminology. Nevertheless, it’s clear that Bunce’s language isn’t intended to be used both ways; it’s a hypocritical, ideological accusation that lacks logical consistency.

The lack of consistency in moral standards is something that we see in the article’s conclusion as well. Toward the end of the article, Bunce finishes by concluding that minority cultures may be preserved by establishing interethnic barriers or boundaries which can be freely crossed by the minority culture, but not the majority culture. This isn’t particularly surprising or novel, insofar as this is something we’ve been implementing as a political solution to the problem of cultural preservation of ethnic minority cultures. In the UK, for instance, we have a Welsh Parliament, a Scottish Parliament, but not an English Parliament. I don’t think the legislators who enacted these parliaments would be surprised by the scientific revelation here, since they presumably already guessed it would be the case.

But to me there’s an issue beyond that which Bunce (and perhaps also McElreath) bear responsibility for missing. When proposing solutions to social problems, researchers are faced with a theoretically limitless number of ways in which to achieve their goals. I could just as easily publish a paper concluding ‘wholesale systematic genocide is a very effective way of eliminating minority cultures.’ It’s obviously true, but also obviously not worth publishing. Likewise in the case of this paper, it seems that author John Bunce is making statements which are obviously true, combining them with those that are logically incoherent, and packaging these into a ‘scientific paper’ hardly fit for purpose in order to promote his political ideology.