For reasons that I struggle to understand, a lot of big-brained Twitter people feel the need to forecast the expected lifespan of this pandemic, and the death toll it is likely to incur over the next few months. Here are five reasons why, in most cases, this behavior is dumb and wrong, although with some exceptions that I’ll note below.

1. We don’t understand how the virus behaves

To construct a prediction about the future, we have to draw on evidence about the past and the present. We assume that the evidence we have at hand is accurate, and if we’re right about that then there’s at least some chance that our predictions will be accurate too. Unfortunately, in the case of coronavirus, this assumption has been false time and time again.

In January, we were told that the virus couldn’t spread from human-to-human contact. In February, progressive governments like Canada affirmed that there was no need to enforce border controls, and now Canada is closed to entry for all except citizens alone. We were told that coronavirus couldn’t be spread to or by animals, and now confirmed cases of corona infections among felines have been reported. In Britain, we were told that herd immunity was going to be the key to getting over corona, and now it is becoming evident that naturally acquired herd immunity may be functionally impossible in the short term due to antibody-dependent enhancement (ADE) properties the virus is now known to possess.

Evidently, our governments failed to respond adequately to the risk imposed by coronavirus because they had faulty assumptions, and the short list of assumptions I’ve documented above is less than the tip of the iceberg. These short assumptions led to bad policy and got people killed. If you are trying to sell your models to policymakers based on your own flawed assumptions, then those deaths ought to be bearing very heavily on your conscience.

There is no reason to believe that our current global understanding of coronavirus is accurate either, so even at this stage models are still horrifically flawed. Only one country has issued a public advisory about the risks of “reactivation” in relation to coronavirus, whereas countries like the USA and UK are still strategizing as if getting the virus makes you immune. Models that are being drafted for use right now in government bureaus across the world are terribly flawed, and this will likely remain the case in the near future, because:

2. We don’t know how the virus will behave in the future

Viruses are not technically ‘alive’ under the generally agreed upon definitions used in biological science to describe lifeforms. But as with all life forms, mutation is a constant risk whenever replication at large scales is happening.

The mutations that have currently been documented for coronavirus are not guaranteed to transform it into a global black death that kills everyone it touches. But that doesn’t mean that such a scenario won’t happen – in truth, we simply cannot know. Projecting into the future about the likely death toll of coronavirus in Brazil based on the deaths in Germany, given that the reality of mutation makes it possible that the two countries will eventually end up with different strains of the virus that cannot be meaningfully compared in this way, is dangerous, dumb, and irresponsible.

3. We can’t compare the impact of corona in the first place

What counts as a coronavirus death? The official guidelines issued by the USA’s Center for Disease Control require that medical professionals report both confirmed and probable cases and deaths, and so the official statistics that get published are a confusing jumble of confirmation, conjecture, and comorbidity. A week ago, the implementation of these guidelines in New York State resulted in a 60% explosion in the total recorded death toll for coronavirus victims, even though people continued to die at the exact same rate as before. This exemplifies the significance of definitions and criteria in how we count the virus, and that matters for both the infected count and the death toll.

It turns out that the definitions make it utterly impossible to compare the impact of the virus internationally in any meaningful way. Since the ‘confirmed cases’ are understood to be widely underreported worldwide, as commonly only patients who are sick enough to require hospitalization get tested and counted, the death count is similarly subject to statistical distortion. A coronavirus death in the USA is not equal to a coronavirus death in Germany, and there are people dying right now at home from coronavirus whose deaths are neither confirmed nor counted. This is why critical information about the virus, like the total average case fatality rate that countries should plan to expect, remain widely disputed and unsettled. If your statistical model assumes the total average CFR is just below 1%, then perhaps opening up the economy might be a good idea. But if this assumption strays too far from the mark, a policy based on your model could feasibly kill tens of millions of people.

4. We are lying to ourselves about everything

In times like these, when precision and factual accuracy can impose unacceptable delays upon the primary task of saving lives, it is hard to say exactly what constitutes a lie. With that in mind, there are at least some cases where countries (i.e. China) blatantly distorted or even falsified statistical data relating to coronavirus – something the media decried as a ‘conspiracy theory’ until very recently. While the recent growth in recognition toward these deceptions is a good sign, China is very far from alone in this regard:

But the lies don’t stop at deliberate underreporting – far from it. In February the US Surgeon General told Americans that masks are “NOT effective in preventing general public from catching” the coronavirus, and that they should neither buy nor wear them. As of now, many Western countries are beginning to step in line with East Asian countries like China and Korea, which encourage – and in some cases, legally demand – their citizens to wear masks. Germany has already done so, and compulsory masking laws will be enforced by police in multiple German regions by the end of April.  Hilariously, the US Surgeon General later backtracked on his initial lies about the inefficacy of masking by encouraging Americans to wear masks or ‘cloth face coverings‘ if they absolutely must go outside. 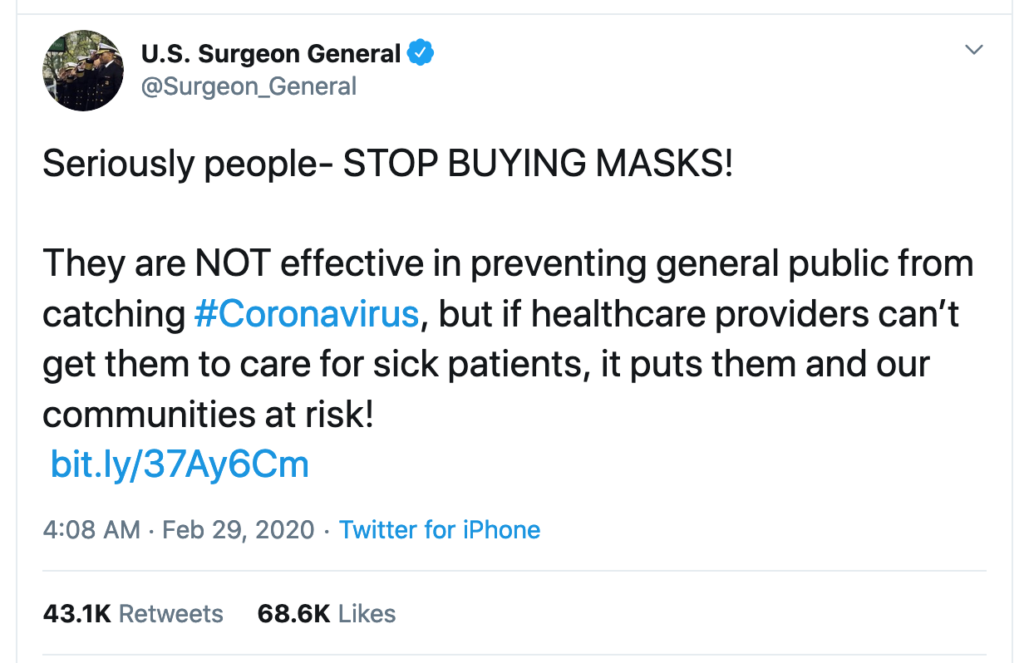 Most of you don’t need me to explain why these lies were broadcasted for months by both state and private media outlets in virtually every Western country. As you already know, this was the quintessential ‘noble lie’ – perhaps even the lie that will come to characterize this pandemic and the criminally incompetent response to it in the history books many years from now. Even in countries that pride themselves on having a ‘free press’ like the UK and USA, newspapers have to abide by governmentally issued reporting guidelines, or face serious repercussions. Without resorting to eccentric conspiracy theory explanations involving NWO or ‘depopulation’, it looks like Western governments simply panicked in the face of a public rush on masks, and facing the prospect of having an undersupply of masks for key frontline medical workers, they simply decided to lie. It’s distasteful, but ultimately rational, given that democratic governments are simply so incapable of ramping up the production of necessary medical supplies that they had no other choice. But yet again, the unfortunate truth is that the ‘Great Mask Conspiracy’ was only the tip of the iceberg.

It’s not just ‘masks don’t work’ – it’s everything. It’s ‘pets cant get coronavirus’ – something we were told very confidently earlier this year, which is now known to be utterly false. It’s ‘maintaining a 2-meter distance will keep you safe’ – yet another item in a long string of lies. Overall I can’t even be bothered to count the long list of lies we’ve been told, or to talk about the countless occasions where the media has decried those who spoke out against these lies by castigating them as conspiracy theorists, Russian bots, or other defamatory terms. If by some miracle you aren’t already aware of this by now, then you should probably go read a more comforting blog.

What this means for the statistical forecasts you see in the news every day is self-explanatory. None of the projections you are reading, no matter how well-intentioned the data scientists who crafted them are, will be free from lies, deception, distortion, or propaganda. Calculations that are forged upon a bedrock of lies are unlikely to be true. There’s really no way around it.

5 (Bonus): Since we’re inundated by uncertainty, we should plan in preparation for the worst case scenario, and we don’t need pandemic projections to do that

By this point, you will hopefully agree with me: neither you nor I have any clue at all about how our societies will be affected by the coronavirus pandemic over the coming months, which means we don’t know what our lives will look like in the near future. In situations of extreme uncertainty, planning for the worst and hoping for the best is the most sensible thing you can do. If you forego the daily news updates and laughable puppet show broadcasts put on by your local politicians, you can focus on keeping a low profile, stocking up on food, water, and other essential items, and staying inside unless it becomes absolutely necessary to do otherwise. If the truth lies on the side of the optimists, then you will only lose the time you spent in the grocery store buying bottled water and tinned sardines. If, on the other hand, the pessimists happen to be right, then you’ll not only lose nothing – you’ll have saved your life. 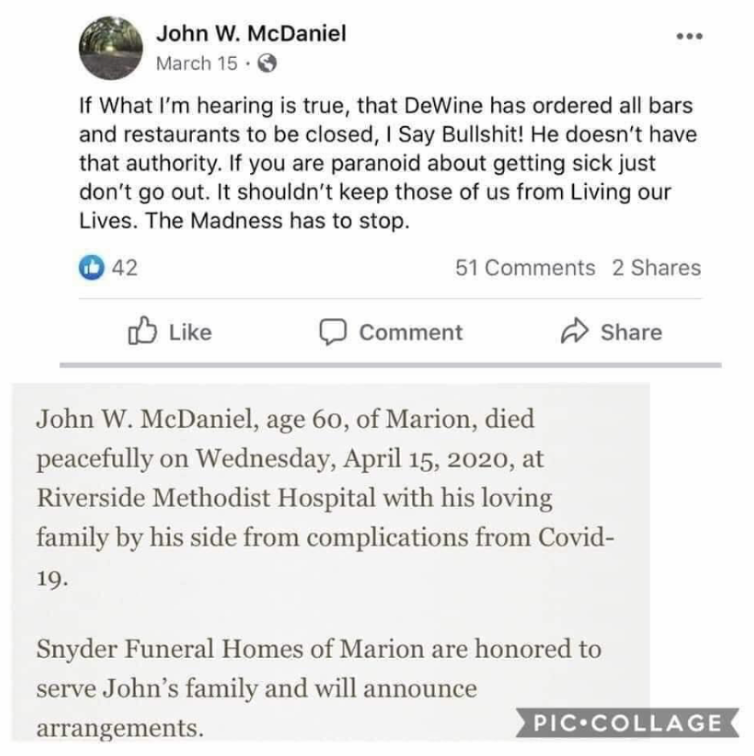 By necessity, policymaking requires us to simplify the impossibly complex world into a finite set of manipulable variables, and most of the time this is a good way of doing things. If you’re directly involved in the policymaking process, or if you need to make hard financial decisions in the context of your investment portfolio, your job, or your small business, then it’s obviously reasonable to survey the landscape of expert opinion and decide for yourself which forecasts seem most reliable. If those conditions don’t apply to you, and you don’t stand to make immediate financial gain from being right about this, then stop wasting your life.