Royal Society recently put out a massive paper by Ross et al. with over 9000 authors (you know, one of those ones) on polygyny and wealth inequality. The title, “Greater wealth inequality, less polygyny: rethinking the polygyny threshold model” would have you thinking that the authors were able to refute or quantitatively disprove the polygyny threshold model with some sophisticated mathematics, but unfortunately this is not the case. Instead, the paper uses a strange mixed sample of hunter gatherer and highly developed industrial populations to argue that the transition to agriculture increases socioeconomic inequality, and additionally results in conditions of subsistence living that for most make polygyny effectively impossible.

Firstly, we should realize that this doesn’t amount to either a refutation or even the titular ‘rethinking’ of the polygyny threshold model. While results from their quant analysis are basically legit, it doesn’t change the fact that the authors have effectively based their study on a tautological proposition; subsistence living results in no surplus wealth (also tautological) which means that it is exceedingly rare for polygyny to be mutually beneficial. Alright. So where’s the challenge to the polygyny threshold model?

I have read a lot about polygyny, but I have never encountered any claim that polygyny ipso facto increases linearly with socioeconomic inequality per se. Rather, claims are made that conditions of high socioeconomic inequality will guarantee polygyny, as male reproductive success is subject to greater resource-dependent elasticity than female fitness due to inherent biological features (i.e. 9 months of pregnancy). This great presentation has more details, but for those with little time:

Or if you prefer (from the presentation linked above; this contains an error, as the 1948 paper cited is by A.J. Bateman, not Bateson): 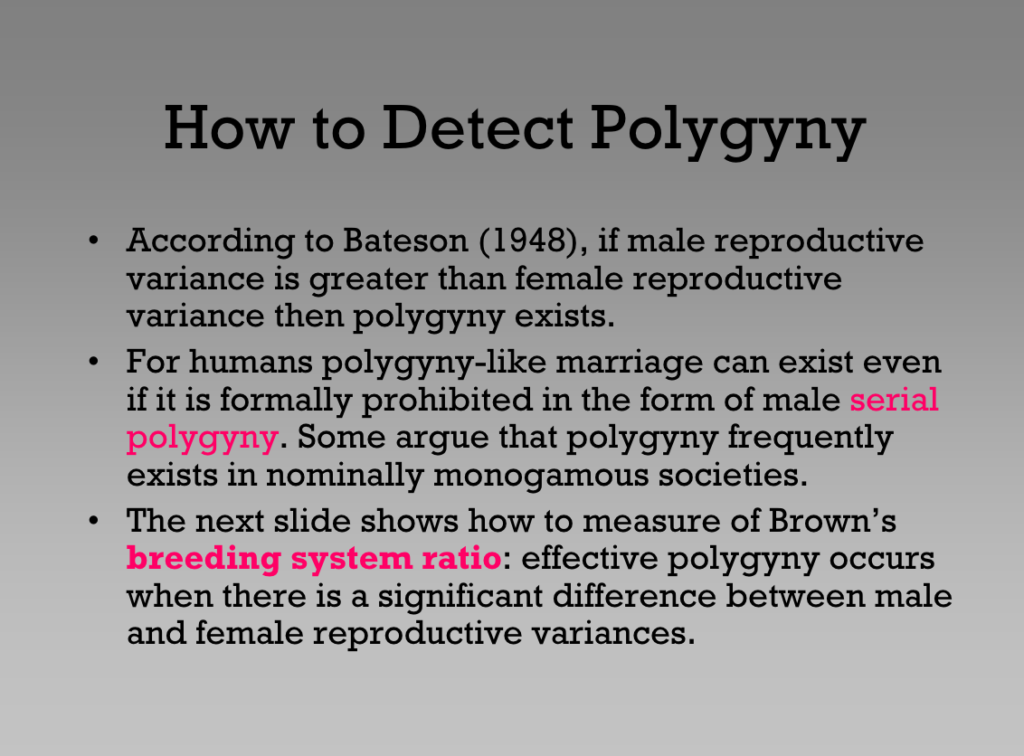 To be fair, the authors recognize this by stating their intention to merely “extend” the polygyny threshold model, but I’d argue they haven’t done so in a way that’s significant enough to merit the “rethinking” boast. But this is not to suggest the paper has no value. Instead, what the authors have actually done is modeled the conditions for polygyny to take place in a largely monogamous society at subsistence-level conditions – unironically a notable achievement. This is a far more interesting result, and one that would merit wider recognition than the paper has currently received.

There are still some problems though. For instance, the paper notes:

Now this actually is a problem, since the definition of polygyny that the authors are using is not actually “polygyny” but “effective polygyny” so defined. I hate it when researchers redefine constructs in this ad-hoc fashion (especially when it’s not highlighted in the abstract) because it can mislead people who don’t read the full paper, and most of the postdocs I know don’t. Luckily, I did.

I think the problem with including sequential marriage into a working definition for polygyny is that there are substantial qualitative differences that distinguish these behaviors. For instance, technical polygyny (one man, multiple women at the same time, in a sexually exclusive [typically marital] arrangement) actually alters the operational sex ratio, among other things. Sequential marriage, by contrast, only means that the available pool of females includes larger numbers of women who already have children – that is, single mothers. Of course this may change the calculus for male satisfaction or some other outcomes, but these are not equivalent to the social effects we expect from a normatively polygynous mating equilibrium. For example, they completely negate some of the reported correlates for polygynous mating, such as female suffering and self-reported detriment to well-being noted amongst women in polygynous marriages (source from observational study in Cameroon). I understand that well-being wasn’t strictly a feature of relevance to Ross et al.’s analysis, but it DOES have implications for the precise ‘leveling’ of the polygyny threshold. A situation where a woman is going to be a second or third-order co-wife is very different to one in which she’s merely a second or third-order sequential wife. These differences matter quite a lot if we’re paying any attention to the implications for (1) the OSR (2) female well-being and gender inequality (3) male violence and intrasexual competition, among many other things.

Now look, I’m not trying to be an ass and negate all the hard work the forty-thousand authors of this study did. But I do find it somewhat annoying when people publish work under “GOTCHA!” titles like “rethinking XYZ” despite nothing comparable to this having actually taken place. Far from rethinking, the authors actually RELIED ON the polygyny threshold model for their analysis, and came to the result that the agricultural transition killed incentive for polygyny amongst most normal people living in subsistence-level conditions. Fair enough. But why not just say so?

IMHO, the far more interesting result we get from the paper is this: we know that transition to monogamy occurred around the transition to agriculture in some societies, and this paper provides some really awesome and useful analysis to explain why that might have happened. But what it DOESN’T do is explain why monogamy actually became a social institution to the exclusion of plural marriage. Just because it isn’t worth it to have 2+ wives doesn’t mean that your society will necessarily ban having 2+ wives. We still don’t have an answer for why polygyny becomes legally and socially prohibited in these agricultural societies. However, I think that primate inequality aversion (as exhibited by this outraged capuchin monkey) might be a good place to start.

I don’t have the data to hand, but I do have a hypothesis. Agricultural transition makes polygyny functionally impossible for overwhelming majority of people, who are living at subsistence. But it DOES NOT affect the ability of men with sufficient social standing and resources to obtain and retain multiple wives. Historically, such men were stratified into classes or castes – merchants or Japanese 商 etc. It seems plausible to suggest that the impoverished majority of monogamous males (and perhaps their wives!) would have expressed strong opposition to their rich rulers taking multiple wives, and rallied to condemn this behavior. Others have articulated this hypothesis before (e.g. Henrich, Boyd, and Richerdson, 2012) but this study provides some useful background evidence for its plausibility. If you’re a man farming away in a Neolithic village under fairly awful living conditions, you might be able to tolerate paying taxes to your overlord despite his nice villa on top of the hill. But what if he has 6 wives and your daughter is one of them? Perhaps there might be an ‘outrage threshold’ we need to think about alongside the polygyny threshold model.