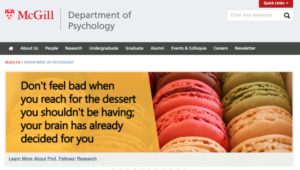 This is one of the most idiotic views I’ve ever seen advocated by tenured staff at a Western university. Let me explain why.

Let’s think about this logic for a moment. The statement above effectively states the following: since the decision as to whether or not you will eat the dessert is out of your control (proposition) therefore you are absolved of responsibility for it, and should not feel bad (conclusion).

To assess this proposition, we first have to come to a definition of ‘control’ – which is far more tricky than it seems. In this context people typically define ‘control’ in relation to various free-will arguments which can be broadly dichotomized into ‘pragmatist’ or ‘logico-determinist’ categories. Logico-determinists such as Sam Harris would state that since no neurobiological evidence exists whatsoever to support any mechanism isomorphic to free will or free choice, either for humans or for any other organisms, and as such we are not technically in control of anything. Pragmatists would broadly agree with these arguments, but would protest that such argumentation tautologically precludes the meaningfulness of free will as a term, which is contradicted by the semantic significance and lexical omnipresence of the term to modern humans.

I think that whichever view of free will or control we take, the proposition outlined above by the McGill Psychology Department is almost certainly true, but in a far broader sense than you might realize. We live in a world where our actions are contextualized by the sum total of all actions that preceded these, which effectively means that actions are really reactions, and are thus determined by that context. As such, when you inevitably act in accordance with the predispositions encoded into your neural hardware, your brain has in fact “already decided for you,” as per the statement above.

But how about the conclusion. Should this really absolve you from responsibility? If we say that you aren’t responsible for your actions because they were predestined by your brain, then what about in the case of rape? It’s not uncommon to hear, in courtrooms, defendants talk about ‘not being able to control themselves’. The Iraqi refugee who raped a 12-year old boy in an Austrian swimming pool a few years back defended his actions as the inescapable consequence of a “sexual emergency.”

Murder is another case we might examine. The circumstances typically resulting in physical conflict trigger a ‘fight-or-flight’ response in us, activating our endocrine systems and pumping our bodies full of chemicals such as adrenaline that cloud judgment and promote physical action. In such a situation, it’s also possible to say that your brain made the decision for you, precluding free will.
Now ask yourself – what difference does it make if some (or even all) murders and rapes do lie outside of the realm of our control? Are we going to start judging rapists in courts of law on the basis of their proclivity to hypersexuality, refusing to jail any rapists if indeed we see that their brains ‘already decided’ for them? Murder, too? If any country were ever to embark on such an endeavor with the propositions above as guiding axioms, they would quickly discover it impossible to judge any person guilty for any crime.

What am I getting at here? The conclusion you’re seeing above is horrifically wrong and terribly dangerous. A deterministic worldview may be scientifically valid, but this does not – and cannot – preclude holding individuals responsible for their actions. The consequences if we don’t – a world in which murderers, thieves, rapists, and worse are not held culpable due to the inevitably influence of their biology and socialization on these behaviors – are far too high to accept.

Even though our actions may not be subject to the kind of ‘free will module’ that proponents imply, there is no reason to suggest that consequences to these actions should not follow. No basis exists to suggest that where agency in actions is absent, reactions should not follow from those actions. All of which is to say: when actions are determined, consequences must be too.